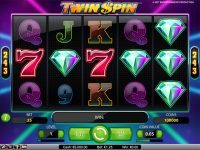 Hello again, Dave here. Now those of you who know me know I like a bit of funky soul (and maybe some soulful funk) so the soundtrack music to the Twin Spin slot game is right up my street! This is a traditional “Vegas Style” video slot that gives you an introduction to the “243” game feature. The great thing about this is it can lead to multiple wins from just one spin, you you can get a lot of bang for your buck from this one.

Lots of features on offer here include the “twin spin” reels it’s named after, good settings controls, bonus play rounds and some high pay outs. Oh, and did I mention the funky soundtrack? I did? Oh well…

About the Twin Spin Slot Machine

We’re on safe “classic” territory with Twin Spin – as soon as it loads you’ll recognise all those classic images you’d expect from a Las Vegas slot. When you’re as old as I am it’s always refreshing to see some of the old favourite again – and here you’ll get cherries, bells, bars and the Lucky 7s of course.It’s a simple and straightforward game and it looks and sounds great – what’s not to like?

Now I know I’ve said I’m a fan of the classic games, but one modern feature I do like is the wildcard, and Twin Spin sneaks wild play into the action which works really well here. It acts in a straightforward way and can stand in for any other symbol on the reels but only appears on 2,3 or 4, getting you winning lines where you thought you’d miss out. That’s it for specials – so no other modern distractions like scatters, bonus symbols or anything else. Old school!

So this video slot might have old fashioned roots, but it certainly has up to date prize potential. Twin Spin’s top base payout is 1,000 coins if you match 5 diamonds on a single pay line. But, with the extra Twin Spin feature the maximum payout is actually a whopping 270,000 coins! With denominations to choose from €0.01 through to €0.50 you can see how real money players like to take Twin Spin for a…spin.

The full paytable is available from the game’s help icon which lists all the available combinations and their win totals.

It’s a Bonus, Jim, but not as we know it… This is where the “twin” in Twin Spin kicks in. If you get two matches on the first 2 reels, they get linked together and you have the chance to respin. When that happens the links can grow to 3, 4 or even all 5 reels, joining them up to achieve the best payouts. With Twin Spin it’s absolutely possible to pick up the full 270,000 coin top payout from just one spin! No wonder the soundtrack is so funky.

Game Settings and How To Play Twin Spin

On screen controls at the bottom of the game give you quick access to autoplay functions, sound controls and other in-depth settings you can tweak including quick play on/off, animation control, graphic quality, and keyboard hot keys. If you’re playing for real money you can also track your full play history down there.
Unlike a lot of modern machines there are no “paylines”, because with Twin Spin it’s about getting winning combinations on reels that link. Oh, and what’s the “243” system I hear you ask? Well, I looked it up – and on this game there are actually 243 different ways to win. Now I like those odds! 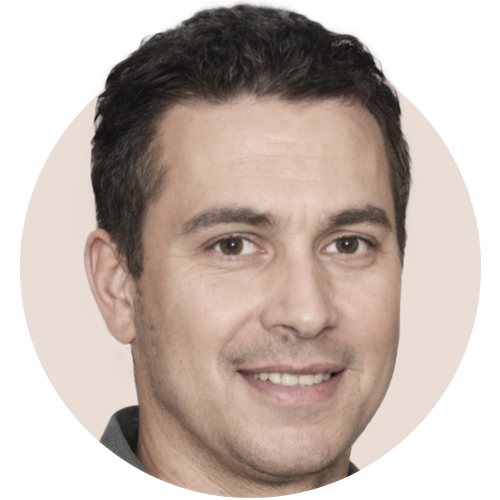